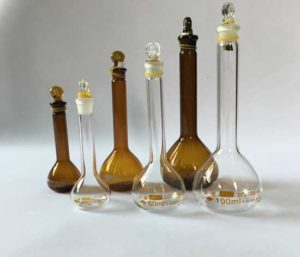 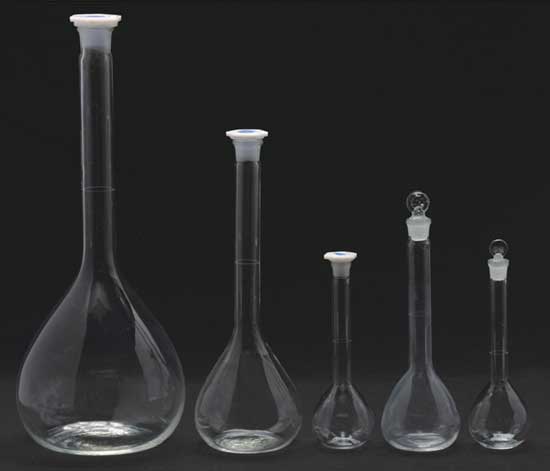 The volumetric flask is a thin-necked pear-shaped flat-bottomed volumetric device with a ground-operated glass stopper with a marking on the neck indicating the volume of the solution when the liquid concave surface is tangent to the line of the capacity neck of the bottle at the indicated temperature. It is exactly the same as the volume marked on the bottle. The volume bottle is marked with: temperature, capacity, and tick marks .

A volumetric flask is a precision instrument for formulating a solution of an accurate concentration of a certain substance . It is a slender neck, pear-shaped flat-bottomed glass bottle with a ground glass stopper with a scale on the neck. When the volume inside the bottle reaches the marked line at the specified temperature, its volume is the indicated volume, which is generally a “volume” volumetric flask. But there are also two markings, the upper one indicating the volume. Often used in conjunction with pipettes. The volumetric flask has various specifications, such as 5ml, 25ml, 50ml, and 100ml, and 250ml, 500ml, 1000ml, and 2000ml. It is mainly used for direct preparation of standard solutions and accurate dilution solutions as well as preparation of sample solutions. Volumetric flasks are also called volumetric flasks